You’ll remember what you did and didn’t do these next few weeks.

Traffic As soon as I posted this newsletter last week, Maggie and I drove down to the Cuyahoga County Board of Elections to return our mail-in ballots.

As we got nearer it was clear that quite a few people had had the same idea.

It was around 12:30 on a Tuesday afternoon several weeks before election day but we sat at the light for ten minutes waiting to turn onto East 30th street to drop off our ballots.

I love to vote.

I am moved every time I do so.

But this was different.

Watching three people directing traffic and cars crawling in both directions to drop off their ballots using the added drop box across the street was exciting. It was beyond moving. It was uplifting.

Before the pandemic, I travelled a lot. Before she died, Kim came with me when she could.

After the election of Bush-the-younger, Kim and I were in England. People would ask where we were from. We were shocked at how many people knew that Ohio had voted for Bush.

For the next few years people would talk to us about Bush - often joking about our inadequacies as a democracy and pointing out the weaknesses of our leader.

These last four years have been different.

A couple of years ago I was in the Netherlands on their election day and a friend offered to pick me up at the hotel I was staying and take me to the local CocoaHeads. We stopped on the way in Hilversum to pick up his wife. Hilversum is the media center of the Netherlands and we pulled up to one of the many buildings on a huge campus to pick her up.

It was amazing to hear them talk about the election and democracy. There had been a fear that the right would pick up some seats and that their government would be pulled to the right like so many around the world. That didn’t happen - at least not to the extent that had been predicted.

But that wasn’t the main story for me - it was the percent of participation in the election. I don’t remember the numbers but more than 80% of those eligible had voted.

That’s not what it looks like in my country.

And one party has been working hard to ensure that fewer people vote.

Four years ago we had an opportunity to commit voter fraud.

Kim was killed in August after requesting her mail in ballot.

Her wishes were clear.

And yet, when her ballot came, it didn’t even occur to us to fill it out.

She was not only decidedly opposed to Trump, but she was pro-Hillary. We knew what Kim wanted. But fraud is fraud.

Actually, to my surprise, Kim had not always voted the way I’d expected.

When we were first married, we watched the returns after voting for Clinton - the other one. When he won, Kim told me she had voted for the winning president in every election.

I looked at this woman I loved and was dumbfounded. She’d voted for Reagan twice and Bush-the-elder? She had changed over time and come to understand the importance of the presidency and the courts.

Four years earlier I had just moved to the same neighborhood and my ballot hadn’t made it to the local polling place. I spent hours driving around and making phone calls to be able to vote in an election where my vote wouldn’t matter. A vote in Ohio against Reagan that year was like not voting at all.

And yet it wasn’t.

I can’t imagine not voting.

This year I’m voting because I’m afraid if I don’t it might be my last opportunity to actually vote where the system isn’t stacked and democracy is dead.

Perhaps. But the signs are there and I’m doing what I can.

My friend Kevin encouraged me to text-bank and so I have. I adopted the state of Pennsylvania and have text banked to thousands. I don’t know if it did any good - but it was something I could do.

I’ve donated half of all book sales on Gumroad to senate races.

The postcards and letters were for a cause that everyone should be able to get behind - encouraging people to vote.

We didn’t care who you’re going to vote for. We think everyone should vote.

I think a party that doesn’t believe that should be voted out.

I was struggling for what to say in the letters.

We had to add a paragraph on why we vote.

My paragraph said “I want to elect leaders who care about what’s important to the people they represent: our health-care, our economic challenges, the environment, ensuring our democracy survives, and meeting our diverse needs.”

I’m not sure that will be effective.

My friend Mark asked when I first learned about voting. For him it was going to a polling place with his mom and grandmother.

For me it was visiting my mom on election day when she worked in the polls at Prospect School.

I remember watching people coming in to vote. In those days their machine was a physical one with levers. You moved little levers next to the candidate you wanted and when you were done a big lever was pressed that recorded your vote and reset the levers.

I remember her coming home late from the polls and she and my dad watching the returns on a black and white television set in the den.

This was before cable channels - when extended news coverage was special.

Anyway, after moving up only a few car lengths for every cycle of the traffic light, finally Maggie was able to turn left onto East 30th street.

We inched along and submitted our ballots. The election official smiled and passed us a sticker. 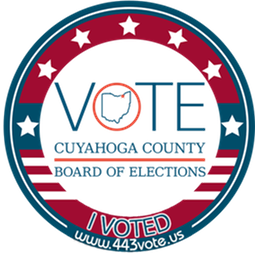 I gestured at Maggie and the two ballots in his hand and asked if we could each have one. He smiled and handed us another.

We slowly passed the people waiting quietly in line to vote in person.

It was exciting and beyond moving.

When I got home I received an email from a friend who’s dying of cancer.

She wrote that when she was first diagnosed two years ago she told her doctor he needed to keep her alive to vote in the next election. She didn’t know who would be running against Trump but she had to live long enough to vote against him.

That’s much more of a commitment than me driving around for a day to vote against Reagan.

It was a reminder of how much it matters.

Her current goal is to live long enough to see Biden inaugurated and her stretch goal is to see Trump in an orange prison uniform.

I love that she reached her first goal of living long enough to vote.

I wish Kimmy had.

I hope you will.

It’s our only hope for rescuing our health-care, addressing our economic challenges, saving the environment, ensuring our democracy survives, and meeting our diverse needs.

Essay from Dim Sum Thinking Newsletter 30. Read the rest of the Newsletter or subscribe