Dealing with a giant mess

I’ve been looking at Japanese knitted lace patterns and meaning to get back to knitting for a while.

Being me, I’ve spent some of that time thinking about writing an app for managing patterns. As tempting as it is to write such an app - I’m really just delaying getting started. I can just print the pattern on a piece of paper.

So I went to see John who owns Susan’s Yarns, my favorite local knitting shop. He recommended a book (which I had), a needle size (which I bought to support him), and gave me encouragement to keep going even though getting started is a bit confusing.

He gave me the same advice a few years ago when I knit this shawl. It starts as a little rectangle and months later it became this amazing triangular shaped thing. 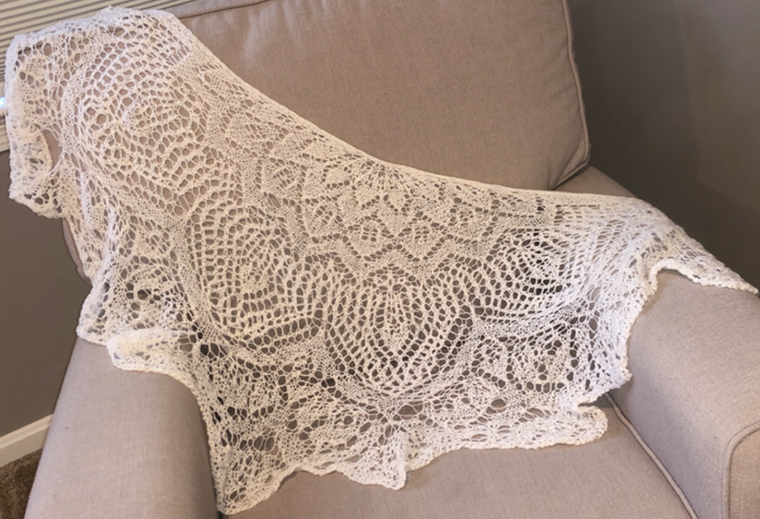 So lesson one is to start and lesson two is to keep going.

I decided it was time to start and so I opened the yarn that Maggie gave me.

Like most people, I find it easier to knit from yarn that has been wound into neat balls.

That is not, however, how yarn is sold.

Yarn is usually looped around loosely in a loop and then the loops are folded in a figure eight or something and then tied together to keep them nice.

If you buy your yarn in a yarn shop, you can usually ask them to wind it into a ball. They’ve got two machines to do this.

One is a yarn swift (I know - as someone who works with Swift, the language, for a living how did I not know this until this week). This is an expandable round grid that you fit the unballed yarn over. It keeps the tension and the organization right.

The second piece is the winder. You pull the end off of the yarn and thread it through something and then you turn the handle and it starts winding the yarn and tilts the ball this way and that so that you get a nice even ball or cylinder of yarn.

I got this yarn as a gift and although most knitting stores will wind it for you even if you didn’t buy it there, I hate to ask.

Knitters are already shaking their heads knowing what’s coming next.

Actually, I knew what’s coming next. I have made this mistake many times over the past twenty years and it always leads to me throwing out some good yarn while spending weeks untangling a mess.

If you don’t have a swift and a winder, you can enlist the help of a family member to hold the yarn in their arms while you wind it.

That would require that I paid attention to lesson three.

Short of that, you can at least loop the yarn over the back of a chair.

I didn’t do that either.

I did what I always do. I unlooped the yarn - though as always, apparently not completely.

I chose one of the two ends, though as always, apparently not the right one.

And I began to wind the yarn.

Initially it went well so I was confident that I was going to be fine this time.

I keep winding the yarn and notice that every once in a while I have to duck the yarn I’m winding under some of the other yarn strands to keep going.

This initially feels satisfying. It feels as if I’m untangling the yarn as I go.

Actually, I’m tying the remaining yarn in knots as I go to solve an immediate problem.

It’s like scratching something that itches because it feels better only to find later that you’re making things worse.

Of course, this is lesson five: don’t scratch no matter how much it itches.

I used to get really dry skin in the winter and would use chap stick and lotion and scratch when it itched. A woman I worked with said to me one day, “you should drink more water.”

It was amazing how right that advice was. She didn’t tell me to stop treating the symptoms but in the meantime she told me to identify the cause.

By the time I’d looped my yarn under a dozen or more times it was clear that I was the cause. I’d made the yarn look like this. 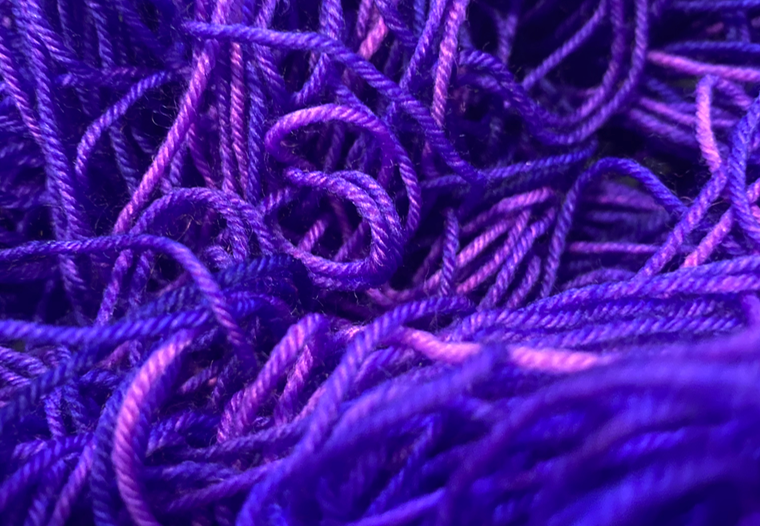 At this point it was too late to go back.

At this point I couldn’t go to a store and ask to use their swift because the yarn was knotted and the swift wouldn’t work anymore.

Lesson six: using the passive voice doesn’t absolve you of responsibility. Although it is true that the yarn was knotted, it is also true that it didn’t knot itself. I knotted it.

And so I set about unknotting it. I gently tug at the next portion of the yarn and wind it through. The knots get worse for a while then better for a while.

I don’t pull hard or I’ll tighten the knots and never get them out.

The plus side is that if I don’t fret about how stupid this is or how dumb I was to do this again, it is a very relaxing activity.

The minus side is that, of course I fret about those things.

And yet we persist

I think about this a lot.

We’ve gotten ourselves in an awful mess. Maybe not individually - but collectively.

Maybe it isn’t my fault or your fault but somehow it is our fault.

It’s going to take a lot of persistent and gentle action to undo this - if we even can.

And all that work is just to untangle the knots that have been tied by the expedient action of a few.

Pretending that COVID would just go away. Pretending coal would come back. Pretending they are consistent when it comes to judicial nominations….  you get it.

And when those knots have been untied - if they can be - that’s when the real work begins. That’s when we start knitting. And while we knit there are so many things that can go wrong.

Even the simplest of scarves takes a lot of work. A simple scarf where we just knit twenty-five stiches back and forth for six feet. Four rows is one hundred stitches. Forty rows is one thousand stitches. That’s a lot of stitches in a six foot scarf.

We have a lot of work to do before we get to that first stitch.

Essay from Dim Sum Thinking Newsletter 29. Read the rest of the Newsletter or subscribe